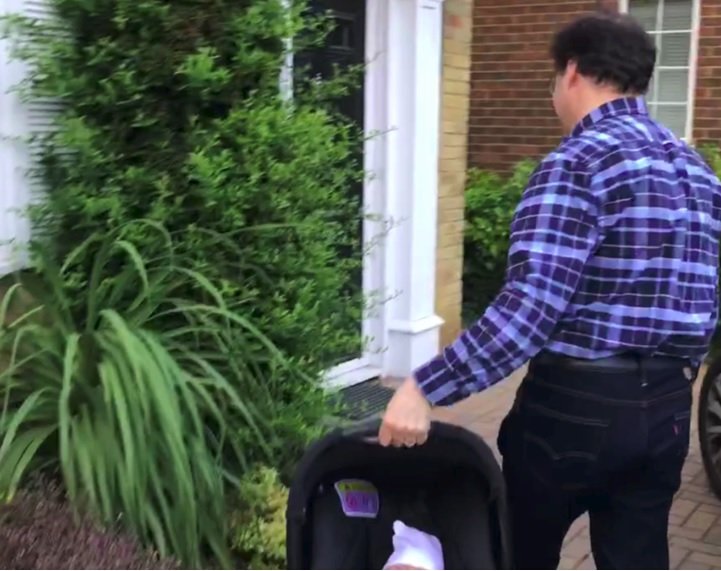 The doctor who saw me on Monday morning instructed me not to eat anything for at least six hours before the c-section and said it was likely I would have the surgery that day and so I had to be nil by mouth from then. A heavily pregnant women who was not able to eat was not the best company for Mr Kindness as you can imagine! Unfortunately, a few hours later a midwife came to see me to tell me that it wouldn’t happen that day. I remember the first thing I did was shout “Give me a chocolate digestive – I am STARVING”!!!!

I was instructed that evening to stop eating from midnight as I would have the surgery the next day – this meant no breakfast. But the same thing happened: the midwife came to see me at 1pm and said she was sorry but the surgery wouldn’t happen. I felt forlorn and light-headed with hunger and stuffed my face with chocolate. I told the midwife that surely they knew I was at ’42 weeks and 1 day’ and my baby needed to come out and she assured me that they had weighed up all the risks and I was being constantly monitored! I was told that I would definitely have my baby the next day.

Later that day I asked if it was possible for me to have a private room as I had been in the hospital for so long and I had not had any sleep in the ward with the bright lights and the noise. (I knew the midwives on a friendly basis and whenever they changed shifts they would come over and say “hi and bye” and “still no baby?!” with a sympathetic frown). I said I would be eternally grateful as this was going to be my last night of proper rest in a long time! Luckily a nice midwife granted my wish and I had a room all to myself – there was the noise outside of generators constantly humming but it was my very own room.

For dinner during what I refer to as my ‘days of wait’ I was treated to some deelish homemade food from my mum and auntie – whatever I requested – which included samosas and potato bhaji’s with chutney, some homemade ladoos and lots of Coca-Cola!

On that last evening before the C-section one of my best friends did a surprise visit with food goodies and it felt so fab to see her. She told me to make sure I recorded the sound of the baby’s heartbeat as it was something I’d always treasure. To this day it sounds to me like a horse galloping on concrete – and makes me smile. We also took lots of pictures and videos of my moving belly and one of me and Mr Kindness for the scrapbook!

Later that evening at 7pm (timing is important for what I’m about to tell you!) I spoke to my mum and she said she and my dad were so relieved that I hadn’t had the C-section on that day as it was not considered to be auspicious in the Hindu calendar! I said “why are you telling me this now, I still have five hours left for this day to end and I’m still getting the odd contraction from the induction!”. I’m not normally superstitious but I didn’t want anything to go wrong for my baby so I crossed my legs for the first time in days and willed the baby not to arrive.

The next morning I mused that it was surreal that I was left hanging on until the bitter end of ’42 weeks + 2 days’ which is the longest time they allow a pregnancy to go on. I had attended antenatal classes with Mr Kindness that prepared us for a ‘natural birth’ and nothing was mentioned about C-sections! It was totally not part of my ‘birth plan’. I mean I was told that birth plans normally fly right out of the window when the time comes but this was taking the biscuit where I had a baby that didn’t want to come out!

When the time came for the surgery, I walked into the theatre in a funky hospital gown and really tight pressure socks. The epidural hurt like hell and it felt so odd losing sensation from the waist down. I was laid down and the bottom part of my gown was pinned up like a curtain on a rail (at this point there is no shame!). Mr Kindness sat next to me and held my hand. I won’t go into detail about the surgery to spare the squeamish… At 12.56pm I was asked if I wanted to see my baby coming into the world and I said “yes!”. The makeshift hospital gown curtain was pulled down on the left and I saw my Bubsell kicking and howling as ‘it’ made ‘its’ entrance into the world.

Mr Kindness was asked to go over to the nurse who took Bubsell for cleaning, weighing and counting ‘its’ fingers and toes. The reason I keep referring to Bubsell as ‘it’ is because I was not told if Bubsell was boy or a girl – the whole team in the theatre knew and Mr Kindness knew but bizarrely me, the mother, didn’t. So when Mr Kindness finally came back to my side I whispered to him “is it a boy or a girl?”.… and he said “don’t you know?”…. and I impatiently replied “No – tell me!”. This is when I found I had a daughter. I couldn’t believe it – I felt so so happy.

I had really wanted a little girl. When I was pregnant a lot of people including my mum had ‘guessed’ looking at my bump that, as I was front heavy, I was going to have a boy. I obviously wanted a healthy baby and didn’t mind either way but I secretly imagined having an active little girl who I would go out with in the rain and we would splash in puddles!

I’ll fast forward as I don’t want to go into the detail of the time I spent in hospital after the birth as it was traumatic. I had the joy of my family visiting on the day I had Bubsell and my mum came over to spend time with me during visiting hours every day. Bless her, she had taken two weeks off work to look after me and help with my recovery. I had to stay longer than I had hoped as my daughter lost 11% of her birth weight. Apparently any more than 10% and they couldn’t let me go home! I also found breastfeeding a ‘challenge’. Like most new mums-to-be I had every intention of breastfeeding but it just didn’t happen for me. It is still a very touchy subject which brings back so many negative memories and so we’ll leave it there.

We finally came home four days later and it was exciting but overwhelming too. We took Bubsell out of the car in her car seat, into which she had been strapped super tightly by the midwife before we were discharged from the hospital! Mr Kindness had strapped her in and the midwife who was supervising kept saying tighter, tighter, tighter – to which Mr Kindness replied “I’m worried I’m going to squash the poor baby!”. Once home the baby was fast asleep and we left her on the kitchen floor. I had a good cry as it all got a bit much for me and after comforting me Mr Kindness hurriedly scrambled together the Moses basket.

The first few days were torture as anyone with a newborn can attest. Mr Kindness and I started getting up in the night to do alternative feeds but we were utterly exhausted by this. We agreed after two days that Mr Kindness would do all feeds up to 4am and I would do all after that. This meant that we could get some sleep each. The feeling of losing my independence was also overwhelming. I felt like I was now incapable of going anywhere as anywhere I did go I would have to take Bubsell and I had no confidence of being able to do that on my own. Especially as my C-section scar hurt like hell and I often needed help getting myself out of bed let alone going outside!

Not only did the scar hurt but I also had my burning hands to contend with. Mr Kindness would let me stay in bed till 10.30am whilst he looked after Bubsell downstairs and I’d wake up looking forward to seeing Bubsell but the horrible feeling in my hands dampened that joy.

I spoke about this at my appointment when I was discharged from midwifery care 10 days after having Bubsell. The midwife assured me that this was a pregnancy symptom that would go away about six weeks after having the baby. As the burning progressed to feeling equally worse in both hands I bought a left hand splint too and it was a mission to put them both on at once. I used to sleep with both splints on and when it was my turn to wake up for feeds I’d take them off and feel the burning slowly creep up into my hands!

One of my friends came to visit Bubsell and suggested that I might have a trapped nerve issue and I could try using chiropractic services. I was desperate to relieve the pain and booked an appointment with a local chiropractor straight away. When I booked it I had totally forgotten that I wasn’t able to drive myself and couldn’t ask Mr Kindness to take me with our newborn and so I booked a taxi to take me five minutes, literally, down the road! It was the very first time I’d left Bubsell and I felt so incomplete, like something was missing inside me. I arrived at the practice and sat in reception scrolling through her photos feeling very teary.

I was called into the practice room by the chiropractor and was asked to take a seat, took my personal details and asked me to describe my symptoms. They silently took detailed notes and coloured in red the hands section of a diagram of the body – diagrammatically representing how I felt!

I went for several sessions with the chiropractor who was quiet, very matter of fact but seemed to like me and chatted about random things during the sessions like how they grew up on a farm. The sessions were a bit random too: at one point they asked me to lift myself up from the table when I was lying down. I looked at them baffled, as if to say “I’ve told you that I had a C-section four weeks ago, so how exactly do you think I can do that?”. They were very sympathetic when I pointed this out and thankfully helped me up!