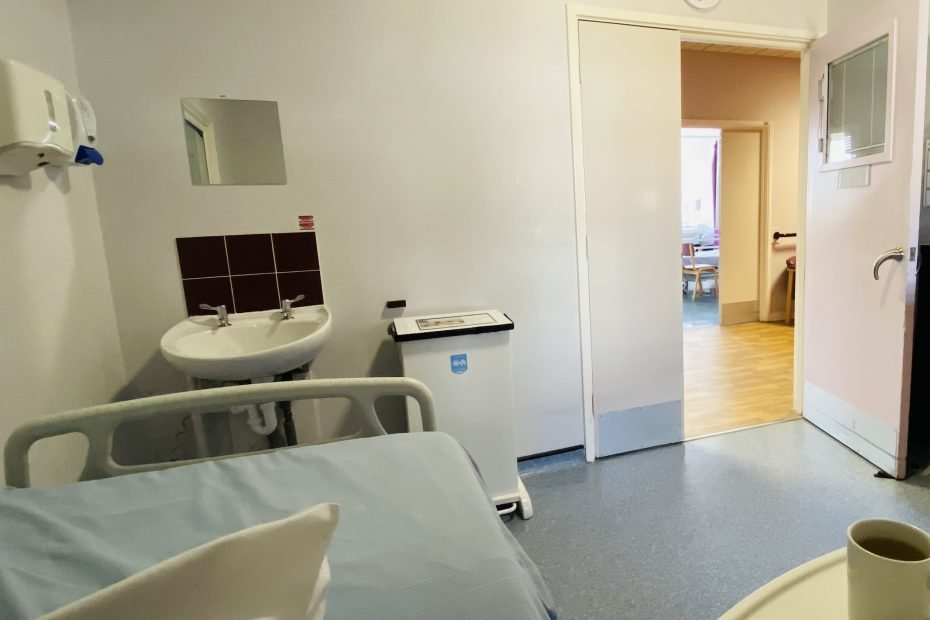 Late afternoon, a surgeon came to talk to me about my nerve biopsy. He said that he worked under the head surgeon who was very capable and brilliant. From discussions with my consultants’ team they had agreed to do the biopsy on my left ankle. He said that the procedure was very routine and in the entire time he’d worked there (I didn’t ask him how long that was!) they had only ever made one error and instead of a nerve they had cut out a vein in error (err, what?) and only found out in the investigation later. I presume he was attempting to reassure me.

The surgeon said that for surgery to happen I must have a negative covid test result. He also stressed that after surgery I must rest for the biopsy ‘site’ to heal which meant elevating my foot at all times for at least a week and try to keep movement to a minimum. He pointed to the makeshift elevation that I currently had for my left ankle thanks to the nursing assistant earlier and said rather bluntly that it was doing nothing for me as it wasn’t high enough – it had to be above my heart apparently! He then drew an arrow with a marker pen on my left ankle saying that this was the site that my medical team had agreed for the nerve biopsy to take place. The reason for the arrow was so the surgeon could identify it easily – very old school!

Before he left he expressed concern when I said that it was unlikely that I would be able to get total bedrest when I got home as I had a baby to look after. He suggested that my best bet would be to hire a wheelchair?! He asked one of the nurses in the ward to research this for me and she came in with a printout of suggestions. I took it all in politely but with a pinch of salt as I had no intention of doing this!

My mum messaged me to ask how I was getting on during the first day and we then had a chat. It all became a bit too much for me and I broke down in tears during the call. She told me to keep strong and that the reason I was doing this was to get better for me and Bubsell and I WOULD get better. I just needed to hang in there. I felt somewhat better after releasing my pent up emotions – my mum always makes me feel better during difficult situations.

My dinner arrived at 6.30pm on a grey tray and I was pleasantly surprised. I wolfed it down and video-called Mr Kindness as I was really missing home. Bubsell was still awake – live and kicking and seemed pleased to see me. She was laughing and clapping away but every so often she’d try to put her hand to touch behind the phone as she thought I was there – that both amused and upset me at the same time. I shut the door and switched the lights off at 10.30pm to call it a day on my first day in hospital.

I didn’t sleep very well at night due to the unfamiliar surroundings and noises. I kept waking up and thinking it was later than it was when I looked at the clock on top of the door which was at 3am, 4.30am, 6am and then finally 7.30am when I thought it was a good time to get up, shower and dress.

One of the nurses came into the room to check my ops which they were doing on a regular basis. I was told this was so that they had a regular pattern of my baseline in case they fluctuated for any reason. They told me that breakfast had been laid out in the common room and to go and help myself. As I’ve written before, it was since being admitted to hospital that I realised just how pathetic my health had become as I hobbled into the common room with my crutch, trying to pick up my left foot.

The common room was a large bright room with lots of windows set out in two parts – one part had a large TV screen which was turned onto ‘Good Morning Britain’ and the other part had lots of bookshelves loaded with books and there was even a karaoke music system in the corner. There were notice boards on the walls around the room with thank you cards and random notices. There were a few small tables with chairs scattered around them.

In the corner they had laid out breakfast with cereals in plastic containers on a trolley with bowls next to it and large plastic milk bottles on the lower shelf. They had a toaster on the table with bread next to it, a selection of jams and tea and coffee containers. I picked up a bowl and tried to balance myself with my crutch to fill it up with cornflakes and top up with semi-skimmed milk. There were two nurses supervising and one asked me if I needed help as I tried to get to an empty table. I told them I was fine – hoping that I would be fine and get to the table without spilling anything from the bowl – I’d be damned if I asked for help for doing something so basic!

The unsociable patient I’d seen yesterday was sat at a table on their own and they gave me a good long stare when I tried to smile at them politely. Another patient came and sat next to me at the table – she had sci-fi looking nodules attached to her head. I had no idea what they were for but she seemed to look at ease. I then had Covid-19 paranoia wash over me, having someone sitting so close but I tried to brush it off by thinking that I was in a hospital, surely a ‘safe’ place. Once sat down she asked me if I was a ‘member’ here. I had no idea what she meant – how can you be a member of a hospital?! So I said no thinking what a weird question but maybe there was a membership system here but I definitely did not want to become a member if such a thing existed. I wanted to get better and resume my ‘normal’ life as fast as possible!

I finished breakfast and headed to my room and a sudden wave of sadness washed over me when I caught myself thinking of Bubsell and wondering what she was up to and had a little cry to myself with the ache of wanting to cuddle her close and sniff her head, taking in her comforting baby scent. It was the first time I had ever been apart from her and I was really feeling it. I was flicking through her photos on my phone when a nurse walked into the room and caught me sobbing – she looked at me with concern and I explained that I missed my baby. She tried to console me saying that I was in hospital for investigations and would soon be home etc etc. I hastily tried to snap myself out of it in front of her as I felt embarrassed having been caught crying like that.

Mid-morning, a porter arrived and took me down in a wheelchair to get my MRI scan. I was whizzed into the lift and to the relevant area where I was dropped off with a kind technician who advised me to take off anything with metal and leave it in the locker outside. She also advised that I visit the loo before the scan as it was likely that I would be there for a while. She wheeled me into the loo and politely waited outside. Once sorted she took me to the scan room and asked if I would be ok to walk to the machine. I hobbled there slowly and was asked to lie down. She and another technician put ear plugs into my ears together with a head set to block out the loud noise and a cannula went into my right arm for the ‘scan with contrasting’. I was whizzed into the machine and asked if I was ok via my headset connected to the sound system. I mumbled yes and they started the scan.

The noise and the surroundings were fairly familiar having had this before. After what seemed like hours (my leg and bum had fallen asleep and I’d lost sensation in my fingers), one of the technicians said that they were going to start the ‘contrasting skin’ which meant liquid dye being pumped into my veins for them to get a clearer picture of my spine. After this the technician at the other end informed me that the radiographer was reviewing the images to ensure they got what they needed and once they gave the go head I’d be free to go. Thankfully the images were good to go and I was able to leave. Once I was off the machine and collected my belongings, I had to wait patiently for the porter to arrive to wheel me back to the ward.