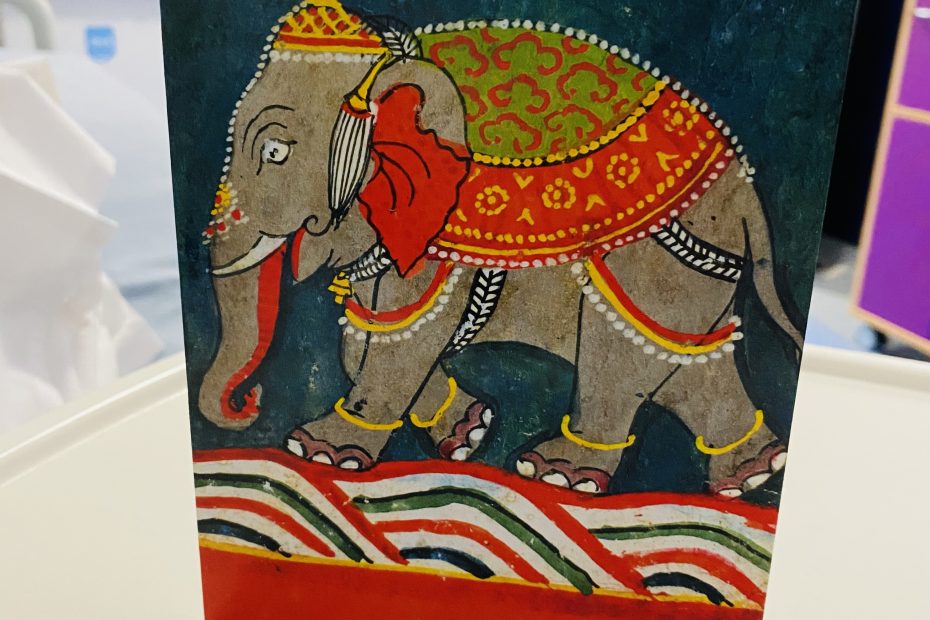 Back on the ward I had the same lunch as yesterday (houmous and carrot wrap and apple juice!) delivered to me in my room. I had ordered it with Christine (the food lady) just before I dashed for my scan – it was surprisingly tasty. I messaged Mr Kindness to check in on them both and he sent me back a few pictures of Bubsell who seemed happy in her little world and was none-the-wiser that mamma wasn’t around – kudos to her Daddy. I passed the time by reading from my motivational books which were helping me keep a positive attitude and I also read a technical magazine on what was happening in my world of work – my way of keeping in touch and my head still with ‘it’!

I had the delight of a lumbar puncture test that afternoon which when I googled made me very anxious. It involved taking fluid out of my spine – sounded horrific. For this experience I had two lady doctors come to my room, one was experienced and the other in training. They introduced themselves and explained what the procedure involved and cracked on. Once they had lined the bed with surgical sheets I was asked to lie on top in a fetal position facing the wall with my back as far out over the edge of the bed as it could be. The junior doctor, coached by the more experienced one, told me that they were going to inject a lot of anaesthetic into my spine so I wouldn’t feel the lumbar puncture. The needle going for the anaesthetic gave me a bit of a shock and the junior doctor shouted “keep still!”. A bit hard, love, when you’re pushing needles into my spine! There was yet more anaesthetic and then a wait for a short while for it to kick in. Then came the procedure but luckily at this point the whole area was so numb that I only felt pressure being applied.

Once it was over, I asked them what they had done (as I couldn’t see!) and they showed me the phial containing the liquid from my spine. I was shocked to see that it was clear! They explained that the liquid in the spine was identical to that in the brain and therefore this phial would help show what was going on in my brain. My mind was blown – science is just awesome isn’t it?! They praised me for doing so well and left after advising that I would probably have a headache and once the anaesthetic wore off the area would be very sore. I should try and drink caffeine as this would help with the headache – good job I had bought my own stash of green tea! They told me that tomorrow Big-Name Neuro would come to see me during their rounds.

Later that morning a nurse came in to tell me the good news that I did not have Coronavirus – my test result came back negative! She said this meant that I did not need to wear a mask in the ward. It was only the nurses that were required to wear PPE. I asked how Covid-19 had impacted the hospital and she told me that the reason there was a delay in me being admitted to hospital was that for a while they were not taking on elective patients. But now there seemed to be a delay in patients coming in which was why the ward was virtually empty. They were still admitting Covid patients but they were ‘barricaded’ in from A&E and had a separate lift and wards. The negative Covid test also meant that my nerve biopsy could go ahead tomorrow!

Once she left, the surgeon from the day before came in to see me – it felt like Piccadilly Circus in my room! He said that my medical team had decided not to get the nerve biopsy from my left ankle but my right ankle instead. This was due to the injury that I had on the left one. He told me that he felt indifferent about it and only needed to be told where to get it from – with that he rubbed off the arrow drawn on my left ankle and drew another on my right ankle. Before leaving he told me to expect to have the surgery before lunch the next day as I was due to be the second patient in surgery after they had operated on a brain tumour patient – the contrast felt mind boggling!

Dinner was delivered on a tray by the same nurse from earlier. Today I had macaroni cheese and an apple crumble to top if off – a woman in hospital needs to eat!

I spoke to Mr Kindness and he said he’d left a little surprise in the zip of my suitcase – I found a lovely elephant card that was posted to me by our coffee shop friends. It had a very touching message inside saying they were thinking of me!

For some reason my anxiety level had shot up in the evening and I started going into dark thoughts again thinking about what the outcome of the tests could be, what it would mean for us as a family, how I wasn’t able to be a proper mum to Bubsell. I talked this through with Mr Kindness and he assured me that all would be well and I had to keep positive and think happy thoughts of waterfalls, rainbows and unicorns (our in-joke of happiness!). We wished each other good night and I hobbled to put my phone on charge at the other side of the room.

Wednesday, I woke up again with the same feeling as the day before due to waking up many times in the night. I felt anxious as today was nerve biopsy day and a feeling of dread washed over me. The last time I’d been in an operating theatre was for my C-section which wasn’t exactly a pleasant experience. Obviously I knew this surgery was very different but it was surgery after all.

I got ready in my bathroom like the day before and headed to the common room to have my breakfast of cornflakes. I was the only one there and so I had my food in peace. I headed back to my room where I texted good morning to Mr Kindness and just sat quietly by myself for a while.

I could hear whispering outside my room and knew that it was coming from the two lady doctors that came to do my lumbar puncture as they had been in the ward when I was having breakfast. My ears perked up when I heard “35-year-old… during week 34 of pregnancy…” and I realised that they were rehearsing for when Big-Name Neuro came to see me. The junior doctor said that she was SO nervous as they could be so hard on juniors! Despite the situation, it was humouring to hear. Before they were due to arrive, a neurology physiotherapist came to see me after the ward nurse had called for one to review the swelling in my ankle. She was a young friendly-looking lady and wore blue hospital scrubs. Just as she started to look down at my ankle, in walked Big-Name Neuro with her entourage, one of whom was wheeling a computer on a stand!

Suddenly there were a lot of people in my room! Big-Name Neuro asked the physio – “Well what’s going on here?” to which she explained that she was here to check on my ankle. Big-Name Neuro immediately replied “So when was it decided that we don’t wear all of the PPE to examine a patient?!” At this question there was pin-drop silence and the physio mumbled an answer and everyone else in the room (including me!) didn’t know where to look as the awkwardness took over! They then asked the physio if they could come back later as they wished to examine me, effectively dismissing her from the room.

In the room now were Big-Name Neuro, Dr Concerned and the two lady doctors from yesterday. The junior doctor was asked to take notes (I use the word ‘asked’ very loosely). Big-Name Neuro started by asking me how I was and I, without warning, burst into tears as my pent-up anxiety burst out and I said I felt very worried. They didn’t acknowledge my tears (thankfully as I felt really embarrassed in front of them all) and said that they could understand that I would be worried and moved straight on.

They asked me to repeat everything that had happened from the beginning, making me skip parts and then homed in on the detail of some parts. For example could I remember exactly when my left foot started dropping and how did it feel. They then quizzed their ‘team’ in the room about my condition and it quite ‘funny’ to see them so perplexed. Big-Name Neuro then asked me if their answers were correct. They then did the same full examination that Dr Concerned had performed on Monday and had the same results. They explained that I would have the nerve biopsy later and hoped that I had read all of the information relating to it but the key thing was that I must have complete bed rest for 24 hours after the surgery! That meant putting no pressure at all on my right foot. They all then left and in came the physio who had been skulking outside.

I noticed that she now wore the full PPE including gloves and an apron! She examined my left ankle and asked me to walk barefoot and could see I had a left foot drop with a right foot drop forming. She had brought devices I could attach to my shoes that would help lift my feet when walking. They looked awful and crushed me inside when she clipped them onto my shoes to show me. I felt like a clown with clomping feet that pinged upwards when I walked. Once she left, I shed tears to myself about how my life had turned out. I used to wear the trendiest brogues in all different colours and now I was subjected to wearing these springy clips on my shoes. However, in the same breath I made up my mind that there was no way I was going to use these no matter how difficult things got with walking – I’d use a crutch but not these funny looking things. I shoved the devices into their boxes and into my suitcase, hopefully never to see the light of day again!