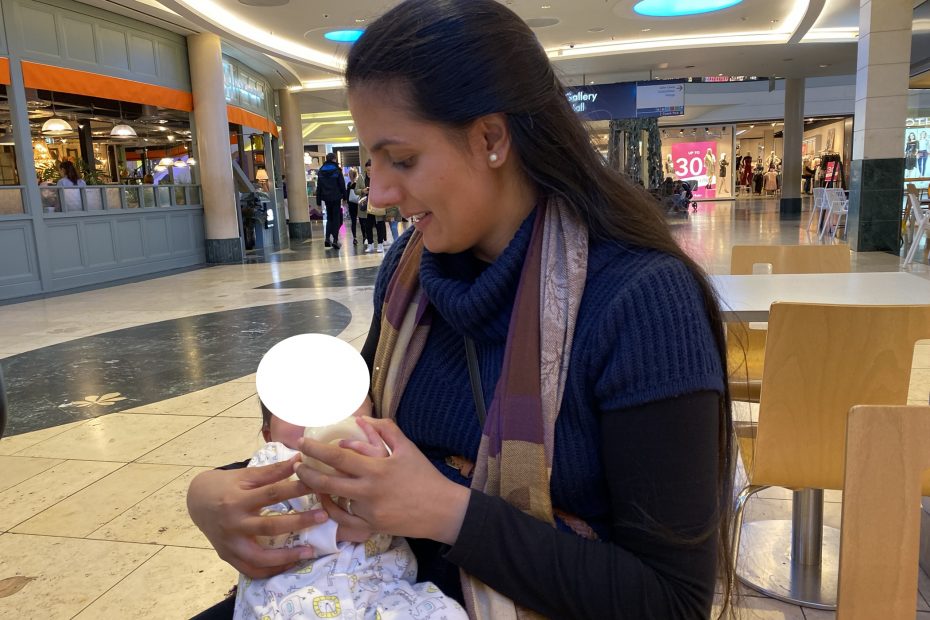 The electrical test (formally known as an EMG) was one of the strangest experiences of my life. It was arranged by the neurologist’s secretary to see another neurologist who specialised in this but as it was being done in a private capacity the appointment was out of hours in an NHS hospital.

I was really anxious not only about the test itself but because it was the first time that we were going to take Bubsell so far away from home. I tried to be as prepared as I could and as the day wore on I remembered all sorted of random things she may need and packed all the bits and pieces into her baby bag. Mr Kindness had a client meeting so he dashed back, I changed Bubsell into a fresh nappy and baby-grow, we quickly wolfed down dinner and set off.

There was a lot of traffic and Bubsell most graciously spat out milk as we were leaving and was very unsettled initially but then dozed off. When we arrived she was still sleeping and we didn’t want to disturb her so we fitted her car seat onto the buggy and whizzed inside (there is a reason for this detail!).

We had some twists and turns as we tried to find the main entrance as we had entered the building from a side door nearest the car park. It was weird being inside the hospital after hours as there was nobody about apart from security and cleaners. We finally found where we needed to be and waited… and waited. Bubsell started getting anxious and wheeling her about in the pram didn’t settle her so we lifted her from the seat and ‘gaaawd’ – she had pooped everywhere – all over her clothes and the seat! I panicked. There was no baby changing facility nearby and she was covered in poop. Inspiration: we dashed into a nearby examination room and changed her on the table which patients usually lie on when being examined. We changed her entire outfit from top to bottom and let’s just say there were A LOT of baby wipes used to clean up the mess. I learned my lesson: never to dress her in a white baby-grow when going out!

I was finally called by the neurologist – I’ll refer to them as Aussie-Neuro for accent reasons! – into their examining room and Mr Kindness and Bubsell waited outside with the door wide open so she would not get upset with me being gone! I was asked to sit on the examination table and next to it was an old computer with wires coming out of it. Aussie-Neuro sat in front of the computer which was on my right and first examined my hands. They asked me to wear an old rusty spirally ring which was attached to an electrode and then gave me a series of electric shocks in my hands. The shocks were very painful on my already painful hands!  Aussie-Neuro typed things on the computer after each shock.

Next was the turn of my legs. Aussie-Neuro apologised beforehand saying this part would be unpleasant (understatement!) and then poked needles in and moved them around to see the muscle power – which was very very painful indeed. When they jabbed the needle into my right leg blood shot out like something in a poor horror film (apologies if you’re squeamish!). A lot of tissues were used to blot the blood (eww). Again, with each needle poke and twist, Aussie-Neuro typed on the computer. Once the ordeal was finally over we waited while they typed up their results into a formal report. They gave this to us to pass onto my original neurologist and said that the results confirmed everything that I was feeling! They thought that it might be a vitamin B12 issue but I was in the best hands with Eccentric-Neuro and they would be sure to find the cause. They asked to be kept in the loop as they were very intrigued with my case.

I keenly waited for my next appointment with Eccentric-Neuro to find the outcome of the MRI, CT and EMG tests but was sorely disappointed when they said that the results did not give any clues! I couldn’t believe that after all those tests there was NOTHING showing up to pinpoint the cause as to why I was in so much pain in my hands and why my legs and feet were not functioning properly. I was really disappointed as I was hoping they would find something wrong  so they could treat it, I could get on with my life and enjoy my maternity leave being a new mum to Bubsell. I was advised to continue taking the vitamin B and if the pain got worse to increase my intake of the nerve painkillers. That was it: “keep taking the tablets”. It was a waiting game to see if the vitamins worked their magic.

And so the routine fortnightly-ish appointments with Eccentric-Neuro began with me trying to note all that I could about my symptoms in between. I began to learn that neurology is a specialism where tiny clues from random symptoms could lead to them being able to find the cause. I told them that my hands burned more during the lead up to my period, that when I woke up first thing there was a very very short window where my hands felt ‘normal’ like they were before all this and as the day wore on they went from bad-to-worse-to-crazy in the evenings. I also had severe tingles in my left foot at night which would wake me up. None of my observations seemed to help find out anything new.

There was one day when I was agony in the evening when I was playing with my daughter on the sitting room floor and had to call Mr Kindness to take over as I couldn’t take it anymore. I felt such a failure as a mother as I couldn’t look after Bubsell and was hugely distracted with this feeling. I was very upset and Mr Kindness comforted me and suggested that I book an appointment at the earliest as the pain level was increasing. I managed to get a last-minute appointment met with Eccentric-Neuro the next day. Unfortunately the appointment was a waste of time for both parties as the response was that it was expected that I would be in pain and just had to wait for the vitamins to do their work. It would take a very long time to get better and it was impossible to give a time scale. Apparently, if my nerves were damaged, they would re-grow by 1mm a week – yes, 1 millimetre a week!

I waited and waited for something to happen to make all this go away and my appointments rolled. September… October… each time I went with Mr Kindness and Bubsell, and each time there wasn’t any real progress to report. We did the usual chit chat: how had I felt since the last time, was there any change (there obviously wasn’t!) and then I was advised to continue with the vitamins and up the dosage of the painkillers if I needed to. Due to the frequency of appointments we got to know them and there would also be lengthy social chats. They noted how big our daughter was growing (showing how long this was going on) and how she was able to recognise them (showing the frequency of appointments). They told us that this was how our brains were wired: we use one neuron to remember one person – interesting fact time!. Then we would say goodbye and they would advise when to book the next appointment.

October felt like an important month as it was Mr Kindness’ birthday and we had planned a special trip to a big shopping centre, our first as a family. In the morning I decorated our kitchen with his cards and lit candles and we had cake. After digging deep in my wardrobe, I finally made up an outfit that would be ‘suitable’. A large navy-blue jumper with leggings and a belt to help shape my non-existent post baby waist. Clothing had become a real challenge: I was assured that my baby belly would ‘disappear’ by itself but alas that is not true. A few months post baby I headed to Primark and bought five black large (men’s) t-shirts and five black leggings and this became my mummy ‘uniform’. Not very imaginative but it did the job. Black leggings have now become a wardrobe staple and I can’t imagine how I used to find skinny jeans comfortable!

Back to Mr Kindness’ birthday. It was raining heavily and after packing everything Bubsell might need, we set off after lunch. There was a lot of traffic and I kept her entertained in the back with all sorts of toys and gadgets. We arrived and I fed her milk before we whizzed about the shops with her pram. I have a photo of me feeding her and looking at that picture now I can see I’m smiling but my eyes say a thousand words. I am transported back to exactly how I was feeling that day: happy that we were out together, trying to have fun as a family, but very sad at the same time as every so often I’d be brought back to reality with the pain.

In November I booked myself in for an eye test. Days later at my next appointment with Eccentric-Neuro I mentioned that the optician was concerned about my left eye being quite dry. It was then that they decided to take drastic action…