My ‘new’ life with Bubsell 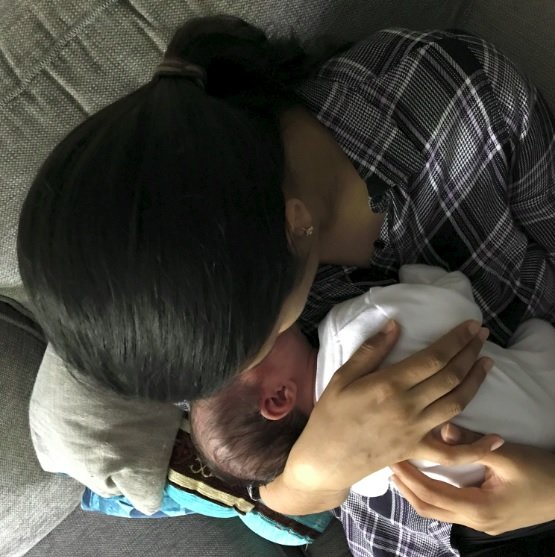 Having Bubsell was by far one of the best moments of my life but internally I felt so sad that it was tainted by my condition. It really broke my heart that I couldn’t brush my hand across her tiny little head of hair or across her delicate skin without burning pain. Mr Kindness took over the washing up and sterilising our daughter’s bottles as contact with water made the feeling much worse – it was like I had knives stabbing within the skin of my hands (yes very gruesome!).

I tried so hard to plough on to take each day at a time and ‘enjoy’ my time with Bubsell and Mr Kindness. I still couldn’t believe that I was a mum and this gorgeous baby was all mine (and obviously Mr Kindness’s too!). I busily captured all her memories in photos and videos as I had convinced myself that this would all go away by the six-week deadline and the precious early-stage moments with her should not be impacted. One evening when Bubsell was asleep in her Moses basket next to me in the sitting room, we were watching a period drama series on Channel 4 called Beecham House and I wasn’t really paying attention to the storyline as the only thought going on in my head was how lucky the actors were that they weren’t suffering from this excruciating pain in their hands.

During week five Mr Kindness served up dinner of macaroni cheese as I was in no condition to cook and I just completely broke down. I was hysterical as I was in so much pain that I couldn’t even hold the knife and fork. Mr Kindness comforted me and said that this waiting around for six weeks was just crazy and insisted that I call the GP practice the next day for an appointment asap!

The next day, Monday first thing, I called the surgery and despite explaining the urgency of the situation, the receptionist gave me an appointment for the Friday that week which felt like an eternity away. Friday finally came and the GP took one look at my hands, saw they were mottled (red and blotchy), was very sympathetic and immediately signed for me take a load of blood tests. Without them they would not be able to tell me anything more. The results would take five days to come through – great, more waiting in agony!

During that appointment I also told them that my scar seemed to be burning so much and they asked me lie down on the examination table and applied pressure to the area. I didn’t feel any pain when they did this and so they said that I should continue to rest and ‘be kind to myself’ – a phrase introduced to me a lot during this journey of motherhood! I shouldn’t go on long walks into town just yet (which I had actually done a few weeks back!). They also said something else that stayed with me: that my body had changed dramatically to grow a baby and that this was now the ‘new me’ that I had to embrace. I was willing to embrace the size I had become, the weight that I had gained, but surely I didn’t need to embrace this pain?

Usually if there is an issue with your blood results the surgery receptionist calls and arranges a follow up appointment with the GP. If there are no issues you don’t hear from them – although this could also mean that your results are lost! So I waited and waited and never in my life have I hoped to have some random health issue that could be the cause of the suffering and once found could be treated quite quickly. As I didn’t hear back I called the surgery and was informed that there were no issues found with my blood results. She made me feel like I was wasting her time! I explained to her that although this was the case I needed to see a doctor urgently and she reluctantly booked a follow up appointment.

In the meantime, things kind of went from bad to worse. One day whilst creeping back into bed from a 4am feed I found that I was feeling pain when I applied pressure on my left foot. It was only when applying cream that I noticed that I had a massive deep cut on the back of my left big toe (apologies if you’re squeamish reading this!). I was shocked because the cut was so deep but I’d never even noticed it. It must have happened one of the times I’d walked bare foot on the lawn with Bubsell. It was only then that I realised that I had lost sensation in both my feet… and legs! It may sound odd that I had not noticed this until now but as I had a C-section I walked in a weird way, instinctively as if to protect the lower part of the body. After the surgery my feet had swelled up and felt odd anyway. I was told by the midwives that this was common and told me to elevate my legs in bed which I did – that made sleeping so fun (not!).

When my second appointment finally arrived the GP was so personable and empathetic. I immediately felt I was in safe hands as they spoke with a kind tone and gave me direct eye contact and frowned when I told them how much pain I was in. They asked me to start from the beginning and I explained everything. After examining my hands, legs and feet they told me that I needed to see a neurologist urgently. To them this seemed like a neurological issue and they suggested that I see one privately as the NHS waiting list was six weeks (they knew this as they had referred a patient earlier that week and had to ‘fight’ the system to be seen at four weeks as a serious case). They suggested a specific neurologist at my local private hospital. In the meantime to combat the pain they recommended a cream which strangely had chilli as the main ingredient which would burn on application and then numb my hands. They also prescribed a heavy-duty painkiller which could potentially make me drowsy and advised that I was not to operate heavy machinery or drive if it did!

After the appointment I visited four pharmacies dotted around the high street to find this chilli cream but it turned out that it had been discontinued from manufacturing. I did however pick up the nerve painkiller from Boots and was again advised on the drowsy effects of the medication.

I finally came back home and filled in Mr Kindness on all that was talked about with the GP. I showed him the medication that I had been prescribed and he agreed it looked ‘heavy-duty’ and that I should start off with a low dose just to see the effects. I was really reluctant to take it especially after reading the instructions and information that came with it. I am someone that when I have any pain I suffer like a martyr until it gets really really bad and only then do I pop a paracetamol. But I took one pill to see what would happen.

I also called to my private healthcare insurance to ask if the costs of a private neurologist would be covered as being a novice to this I had no idea how it worked. I scribbled down the authorisation code they provided and was asked if I had a neurologist in mind and gave the name my doctor had said and was told that their cost was fully covered and also listed out other possible neurologists for whom I would have to pay a ‘top-up charge’. I had no idea what this meant and how this would work but just agreed everything and scribbled it down! I then called the hospital and found that the recommended neurologist was on holiday – it was August after all – so I decided to go with the one neurologist who was available that week. I then had the palava of calling my insurance company back to give them the name of the said doctor and they informed me that unfortunately I would have to pay a top up charge (great!). I also had to call my doctors’ reception to let them know who to address my referral letter to. It was like a full-time job as I made these calls all afternoon!

I now had to wait a few days for my appointment with the neurologist.