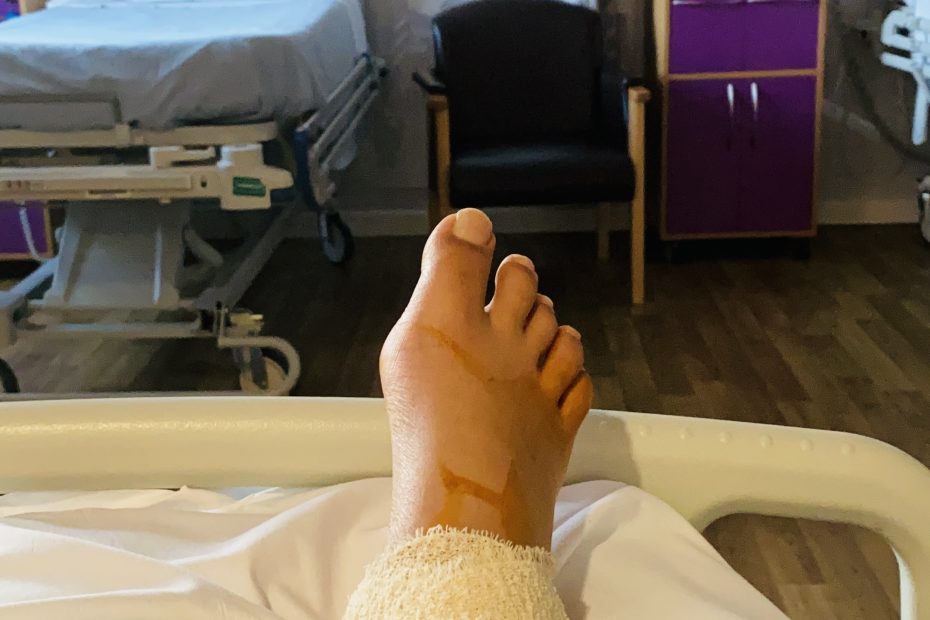 I didn’t have much time to feel sorry for myself as a young nurse from the ward came in and gave me a hospital gown to change into and put a white surgical sock on my left foot.

She said I would be taken down to surgery in 15 minutes. I quickly changed into the gown as it all seemed go go go and I sat at the foot of the bed in my room. Bizarrely it felt like a momentous occasion as I was about to have a body part removed so I randomly took some pictures of my right ankle to remember what the ‘before’ looked like. I didn’t know what the ‘after’ would look like but this way I could capture how I remembered it now.

I waited and waited for ages to be called which was a contrast to the ‘it’s all happening’ vibe earlier. The same enthusiastic medic from Monday came into my room and took more bloods – I had no idea these had to be done. He just said that he had been contacted by my medical team to come in and take them before the surgery?! After more waiting a porter finally came in to take me to the operating theatre. I asked about where I could keep my mobile and one of the nurses took it from me to put in my bag.

This was the second time I was wheeled around in my bed to go to the operating theatre! A nurse from the ward accompanied me with the porter and we arrived at the theatre floor which had a very chic, sophisticated and clean ambience with air conditioning – a contrast to the ward.  Once we were in the operating room, the nurse ‘handed me over’ to the surgeons. The room was very high tech looking with lots of bright light – a massive wash basin in the room where the surgeons, dressed in their scrubs and PPE, were lathering their hands to get ready for my surgery. There was a massive TV screen in the room which had what looked like a visual of a brain – I’m sure that was not my brain?! The surgeons took down a side of my bed and rolled me onto the operating table which felt cold and hard underneath me. I was asked to lie back, relaxed on my left side with my right foot out straight. The head surgeon came over and introduced herself to me – she seemed very smiley and friendly and said the procedure was very routine and would be over in minutes.

The surgeon who had come to see me in my room also came over and asked if I wanted to know when they were about to cut my nerve. I replied “no thank you!”. I was then asked to be as relaxed as I could and they started the procedure. Throughout it I just stared at the brain visual before me whilst I felt prodding and tugging on my right foot. Despite my request (which must not have been communicated to the head surgeon) she proudly announced “we are cutting the nerve… now” which made me cringe and feel pain which was crazy as they had applied aesthetic to the area so I wouldn’t feel anything – and I wasn’t able to feel anything in my feet anyway! It did certainly feel like it was over in minutes.

The head surgeon came over to tell me that the procedure had been successfully completed and told me that I would need to book an appointment with my GP in two weeks to have the stitches removed. She said they would give me four extra dressings just in case I needed them and I needed to make sure I did not apply pressure to that area for at least a week and she stressed bed rest for the next 24 hours. That was it – her team swept out of the operating theatre and I was just left with a medic who called my ward for a nurse and the porter to take me back. Two medics silently lifted me from the operating table and slid me back into my bed propping up my right foot which now had a dressing round it with marks of what looked like iodine. To help cut through the awkwardness I asked them what the brain visual was on the screen and they looked at it and said “oh nothing” and switched the screen off. I clocked that that it may have been a brain scan of the brain tumour patient before me! As they wheeled me out of the theatre I said “that was much easier than having a baby!” and one of them, not really catching onto my humour, said “well I should hope so!”. Oh well I tried.

They handed me over to the kind nurse from my ward waiting outside with the porter who asked them about specific instructions on my handover. They didn’t know so they called the surgeon from their ‘common room’, just opposite the theatre. I could see from the height of my bed through the narrow window in the door the surgeons chilling with their phones and eating lunch. One surgeon came out and stressed the 24 hours bed rest and nothing else specific.

I was then wheeled into lifts to head back to the ward and there was a lot of tumbling about as they moved me and I felt very vulnerable with my newly operated-on ankle! I was wheeled safely back to my room and saw my lunch had been delivered on my table. I asked the nurse to pass me my phone from my bag so I could call Mr Kindness. She told me that it was not in there. I panicked saying that’s where I had asked the nurse to put it and she went to investigate. She came back with it – saying they had kept it in their office for safekeeping. What was funny was there were some really odd shots of their office in my camera roll showing their desks and a random angle of a nurse working.

I had my lunch sat in the same spot in the same angle on the bed – this 24-hour bed rest was going to be tough! I needed to go to the loo and I called for a nurse and in came Nurse S who told me that she had been assigned to me for that day. I told her that I needed the loo desperately and how was that going to happen with this bed rest business and without a blink of an eye she said “Oh don’t worry, we’ll just use a bed pan!”. I was like waaat – no way. I’m not doing that. She was like “Ok… let’s think of something else. How about you get on to the commode and I wheel you to the loo” – but that seemed impossible without applying pressure to my foot! In the end I decided I was better off stripping myself of dignity than causing injury to my foot and opted for the bed pan option.

I asked Nurse S to leave the room and once she sorted out the practicalities, she said she’d wait right outside the door and I should call for her. I followed her instructions and called out to her once I was decent but she didn’t come – which left me in a bit of a pickle as there I was propped up using my upper body strength waiting for her to clear away ‘everything’. I called and called “S… S…” like a mad woman as it’s not like I could just get off the bed. She FINALLY arrived saying “Oh, so sorry I got caught up!”. I was NOT impressed. I guess the silver lining was her complementing me on my amazing ‘flexibility’ to prop myself up like that for that time to which I replied “Oh it’s all the Pilates exercises I do!”.

After that fiasco, in came the junior lady doctor in my consulting team who told me that she was here to do my full body examination. I was a bit taken aback as I had completely forgotten about this. She assured me that it was totally routine and didn’t involve anything invasive – it was just her observing anything unusual on my body that could give clues as to what might be going on. Once checking the door behind her was firmly shut and with the presence of a nurse from the ward who she had requested earlier, she asked me to remove my hospital gown. This was easier said than done obviously, with my recently operated-on right leg elevated up in the air! She did a through observation of my body taking with her any tiny ounce of dignity that I might have salvaged after having a baby. She noted a few minor things in her notes which included new moles on my leg and foot and took pictures of them with her phone. She assured me she would delete them once she had uploaded them to my medical file.

Nurse S then came in telling me that unfortunately I would now be shifting rooms as they had a new patient on the ward and as I’d been tested negative for Covid-19 I didn’t need a room of my own. I got really annoyed at this point asking why I was not informed of this earlier in the morning when I had some capability of using my own legs to pack up all of my stuff! Nurse S was sympathetic and apologised, saying not to worry as she would help pack everything up just as I liked it. I told her I was really fussy about my things and she said there was nothing she hadn’t dealt with before! With that she went into the bathroom and packed up my toiletries and being a chatterbox commented on my creams and potions. From my specific instructions she helped load everything into their specific bags ensuring I’d be able to locate it all later. Once this was sorted, moved everything including me (in my bed) to the new room, well to the new ward.

It was a female-only ward with three other beds and I was the only patient in this massive area as, due to Covid-19, there was a slowing down of admissions. It seemed like the luxury of a private hospital having that level of space and privacy for myself.