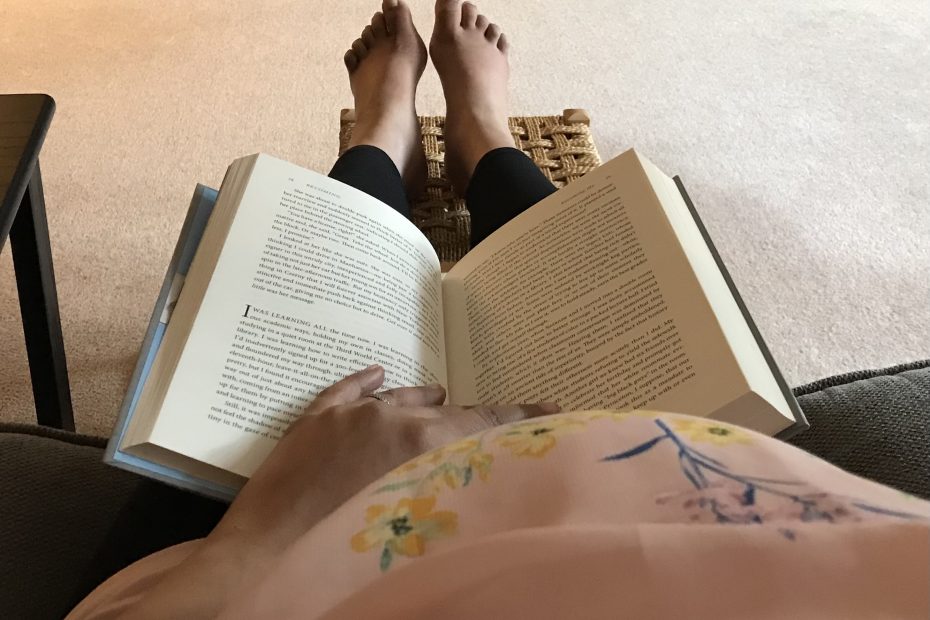 Four months into my pregnancy, while walking up the stairs one day, I felt like my heart was racing as though I’d run a marathon. I rested a while and it calmed down so I didn’t think much of it.

A few days later when walking to my next midwife appointment the same thing happened but this time my heart was beating so fast I had to sit down there and then as I thought I would pass out. The nearest place I could find was someone’s front wall so I sat down and called Mr Kindness but he didn’t pick up! I mustered up the courage to walk to the surgery constantly stop-starting and had heavy legs by the time I got there.

Mr Kindness called when I got there and I was in tears so he rushed down to join me.  I told the midwife what had happened and she suggested I see a doctor afterward. I waited in reception for ages to see one and they did an ECG test to detect any heart abnormalities. When they printed out the results they told me that they thought I might have arrhythmia (an irregular heartbeat) and immediately asked another doctor for a second opinion and they confirmed it! I started to panic but they reassured me that maybe I had always had this but told me to get some blood tests and they would arrange an appointment for me with a heart specialist.

The appointment came around and Mr Kindness took me to the hospital to see the cardiologist. I had to do another ECG, this time taking my top off and having my bump out in front of a middle-aged lady who tried to reassure me that she’d seen it all before (awkward!). After the test I saw the cardiologist who was quite intimidating with a really piercing gaze that didn’t require any blinking! He asked me why I was there as he’d read the ECG test and it looked totally fine! He said that both of the doctors must have read the printout upside down as there was no evidence at all of arrhythmia (waaaat?!). He also said that I had been referred to him incorrectly as I should have seen a ‘pregnancy cardiologist’ (ok what the hell?!). So he would re-refer me – great we’d need to take more time out! The pregnancy cardiologist arranged for a full heart scan and it was fascinating to see my heart on screen, just like a sci-fi movie. The specialist told me all looked totally normal and I had a happy healthy heart!

On the same day I had a 24-hour heart monitor attached to me which accompanied me home and I had to drop back the next day. I was told that any time the palpitations came on to press the buzzer and to note it on a piece of paper. Of course, sod’s law kicked in and that whole time nothing happened!

For the follow-up pregnancy cardiologist appointment I had to go through the humiliation of a topless ECG again! The pregnancy cardiologist was a very softly spoken lady and she read the results and confirmed that it all looked ‘normal’ and was common in pregnancy. She was positive it would go away once I had the baby. But there was yet more fun to be had…

One evening whilst watching tv with Mr Kindness I found that my hands were itching all over my palms. I just wrote it off as being yet another pregnancy delight. I mentioned this to my subdued midwife and she told me to keep an eye on it just in case it was a liver condition that happens only in pregnancy (another thing I wanted to experience -not!).

In the weeks that followed, the itching slowly progressed into intense burning pain in my hands. This was explained to me by the midwife as being ‘carpal tunnel’ which was common in pregnancy and would go away. As the pain was bad I booked an appointment with a GP who assessed me and confirmed that it was… carpal tunnel. They recommended I wear a splint on my right hand which was very inconvenient to say the least and didn’t seem to help. Gradually the burning started to creep into my left hand as well! For short term relief Mr Kindness would fill a jug of ice-cold water for me and I’d sit at the dining table with both hands clutching it to let the coldness seep in which did seem to help.

The last few weeks of the pregnancy were very uncomfortable as any pregnant woman can confirm but the burning hands made it unbearable and I couldn’t wait for this misery to end. It was the peak of summer and I started maternity leave at 38 weeks. At 39 weeks I was so miserable. Mr Kindness and I were advised long walks were the best to bring on labour so we walked and walked and walked everyday but nothing. I’d come back home, park my bum on our bed or sofa and read Michelle Obama’s book ‘Becoming’ to give my brain nourishment to plough on and remind myself that as a woman and soon to be mother I could achieve anything! Rather randomly I also watched a South Korean show called ‘Let’s Eat’. It was based around food with an entertaining storyline, all in Korean and I had to read the subtitles to follow it – super entertaining. I used to sing the theme tune to Mr Kindness who found it quite ‘amusing’. These were all such awesome distractions!

I eventually had to be booked in with my midwife to have delightful things called ‘sweeps’ – the less said about these the better but I had three in total – but nothing, nothing came of this experience!

Ultimately I was booked into hospital to be induced and knowing what I know now I would never have gone down this route. We left our home on the hottest day of the year (fact) and headed off with my baby bag. It seemed such a momentous moment as we knew when we returned our baby would be with us. We arrived, parked and walked in the blistering heat into the maternity ward where I was shown my bed. It felt so odd: this was ‘my bed’? There was a woman in a bed opposite me with her mother sitting by her. Both seemed to want to keep themselves to themselves when we said a polite “hello!”.

I hopped onto my bed and the sheets felt so crispy and the blanket so rough. It was so hot that I requested a fan. I was told that they had all been handed out and so instead they were keeping the windows open – fabulous!

An hour later I was given a ‘pessary’. Again the less I go into this, the better but I will say it was a traumatic experience. The midwife explained to me what a contraction was as I had no idea and she said to let her know if they started to get more frequent. Soon after I said to Mr Kindness that I thought I was having a contraction, then another, then another. He timed them (having watched several episodes of ‘Call The Midwife’) and said they seemed to be every four minutes. That seemed quite frequent? We pressed the buzzer by the bed and a midwife appeared. She seemed as surprised as we were by the frequency. I was then strapped onto a machine which tracks the contractions. They were bloody awful. Not what I was expecting at all. But as my luck would have it, I was experiencing ‘hyper-contractions’ where I’d have a big one and then a small one straight after with no break in between!

I had a surprisingly tasty hospital meal of mixed bean curry with rice to keep up my strength. A few hours passed and one of the midwives noted with alarm that my baby’s heartbeat had gone down, right down, and this is when all hell seemed to break loose. The pessary was hurriedly removed and I was wheeled into the emergency suite in my bed, via several corridors and lifts – it felt like a scene out of ‘Casualty’.

There was a lot of (muted) panic and at one point there seemed to be 50 people in the room, with doctors and midwifes and specialists coming in and out. But finally at 3am in the morning all was calm. Bubsell’s heartbeat had returned to normal and I was asked to walk, yes walk, back to the ward! It really felt like ‘how the mighty have fallen’ after all that being wheeled at speed. I told Mr Kindness to head back home for some rest and I would try and catch some sleep. What a joke that was – who can sleep with the noise in a maternity ward at night?!

The following day, once up I had made up my mind I wasn’t going to go down this induction route – Bubsell wasn’t happy and it was hell for me. I was still getting contractions but nothing was really happening. I decided (if I had a say in a decision) that if Bubsell didn’t arrive naturally then I would have a c-section. I said this to Mr Kindness when he arrived and he supported my decision. My parents came to visit that day and my mum (being from a traditional Indian background that was into the holistic approach) wasn’t in agreement. She would have preferred me to deliver naturally – but what could I do – it really was out of my hands?!

When the doctor did her rounds on the Monday morning (yet another day had passed) to my surprise she simply asked “What would you like to do?”. I said “Can I have a c-section?”. She agreed, saying that my baby clearly wasn’t happy being induced and so a c-section it was.

I was asked to sign a consent form which had the words  ‘RISK OF DEATH’ in bold capitals with a number next to it for the probability – not something you want to read. I signed it all the same – what choice did I have?