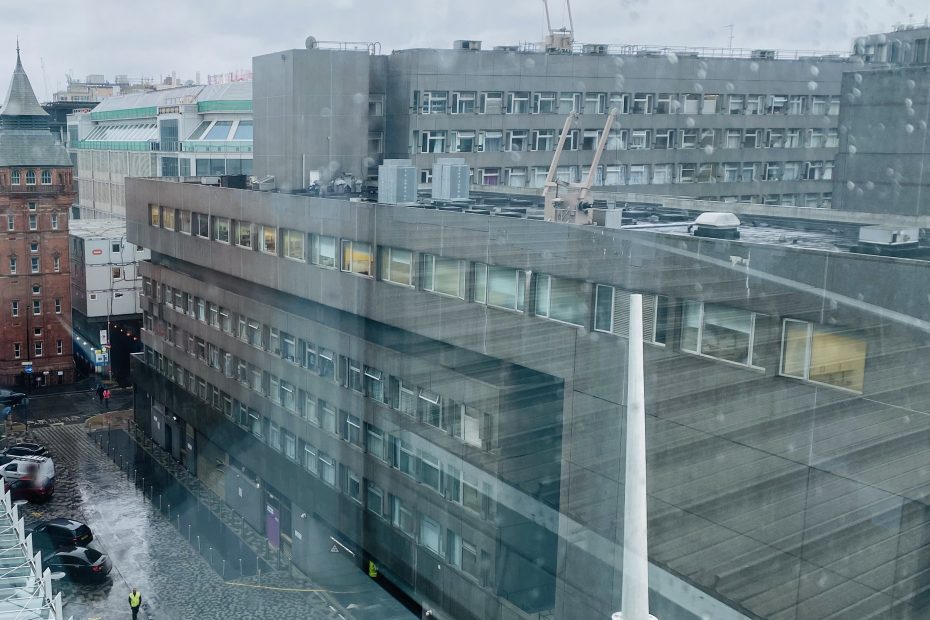 A week passed by and I got the call to attend a PET scan at the city hospital. They asked if I could make an appointment the following day and I rushed to ask Mr Kindness if this was ok with his schedule – he agreed and I snapped it up. The person who called was very clear with their instructions and told me not to eat or drink for six hours before the scan and only to sip clear water.

The next day, once we got near the hospital we drove round and round as there were so many ‘lockdown’ roads taking place that we couldn’t quite work out where to go. Finally, Mr Kindness dropped me off on a side street and with my crutch and new ankle braces I walked to the hospital entrance wearing my mask. The plan was for him and Bubsell to ‘hang around’ and walk about the local streets as nothing was open – not even the parks.

On arrival I was met at the entrance by a security guard who checked that I had a mask on and asked me to squirt hand sanitiser onto my hands – as a side note, you can imagine how ‘glorious’ that felt on my hands! Once I was inside I was shocked at how lax the rules were – there were people sitting close to each other in the foyer and when I got onto the lift there were members of medical staff in their scrubs but not wearing masks! Once I arrived at the right floor there was no one around so I wandered about until I found a sign that said ‘Nuclear Medicine’ which sounded very sci-fi and I followed it to a reception area. I was asked to wait in the common area where there was an older couple sat together who looked at me suspiciously as though I was carrying the dreaded virus!

I was eventually called into a cubicle and given an injection that they informed me contained radioactive particles that were perfectly safe but would mean that I would have to stay away from children for 2-3 hours as I was effectively radioactive! I was shocked and told the technician that I had come into London with Bubsell in the car as no one had told me this. They told me not to sit next to her in the car but to sit at the front (hmmm I was sceptical it was a better solution but unfortunately it was the only solution). Once injected I was told to lie down and wait, which I did for 45 minutes on my own with my thoughts in the dark cubicle.

After what seemed like an eternity, I was called into the scanning room and had to take my shoes off including my ankle braces and anything with metal. I was asked to lay down outside the scanning machine which was similar to an MRI one and then the technician pressed a button which made me move into the machine. I was in and out in half an hour.

Once I left the department and reached the lifts, I called Mr Kindness and he asked me to meet them at the same place he dropped me. I walked to the car and tapped on the window. He was taken aback as he was expecting me just to sit at the back with Bubsell. I told him what the technician had told me and he cleared the front seat and we set off.

On the way back home he told me that unfortunately they hadn’t been able to walk anywhere and whilst they were driving around Bubsell had fallen asleep so he’d just park up on a random street nearby and just waited there. We got home and I sat in the sitting room in an attempt to stay away from Bubsell until the ‘radioactivity’ time was up. In the evening Mr Kindness was understandably exhausted and so he asked me to sit with Bubsell whilst she was stirring on the swing in her room so that he could have dinner and some respite. She woke up crying so I unstrapped her, picked her up to change her and tripped over my right foot – which demonstrated that I was developing a foot drop on this foot – I really was broken. I told Mr Kindness about this later and he told me off that I should have called him to pick her up.

There seemed to be a period of nil activity after the scan while we waited to hear the next steps. Life was mundane with not much going on due to the lockdown. Mr Kindness popped out every so often to do the shopping and tried to time it during Bubsell’s morning nap. It feels so alien to me now but at the time I was terrified of her waking up whilst he was away as I couldn’t pick her up from the swing she napped in as my balance had deteriorated. Most of the time we were ok but once she awoke as soon as Mr Kindness had left. She cried and cried and cried. He had moved her swing from upstairs to the sitting room for my benefit. I went to check on her, popped her dummy into her mouth and gave her a fresh milk bottle which helped her fall back to sleep for a short while. But she soon woke up again and started crying wanting to be taken out. I sat opposite her crying too saying mama is sorry but I can’t get you out. I entertained her in the way that I could sat there until Mr Kindness got back.

Mr Kindness would time his daily shower for first thing in the morning when Bubsell was still asleep or when she was distracted in the playpen so I wouldn’t have the burden of picking her up. I felt so guilty that I couldn’t be the mum I wanted to be, the one she deserved, that it made me feel so useless and I spent time alone crying about my helplessness.

I used to get contacted by other mum friends that I had made during antenatal classes and I felt so envious when they shared their experiences of going on long walks during lockdown and moaning that there wasn’t much to do. Here was me sat at home not being able to do anything!

I decided that I’d had enough of sitting around waiting for my ankle to miraculously heal so I took it upon myself to start physiotherapy sessions. I called up my insurance company to have them authorised and after a short wait they gave the all-clear to have as many as I needed to get better (lucky me!). They provided me with a list of three local physiotherapists and I picked the one in the middle (to be random!). I called them to book a ‘virtual’ appointment in the next few days on the Monday. Their schedule seemed to be clear in the circumstances as they gave me free rein to book in straight away! During the appointment I had Mr Kindness be my cameraman with my laptop and so I had my very first official zoom call of lockdown! The physio asked me to move my left foot in a range of different ways to see what I could do which was very little – even Mr Kindness was shocked at my lack of movement. They said it was a shame we couldn’t meet in person as they would be able to feel the stiffness properly but suggested a variety of exercises. One was tracing the alphabet with my big toe – I’d never heard of this but it was ingenious as it allowed movement of all the different muscles!

I soon had another telephone appointment with Knowledgeable-Neuro and they were very impressed that I had had the scan done so quickly – we were clearly on it. They reviewed the results and said that the scan showed no underlying illness/disease. I asked what was next in the plan and they said that there would be further investigations but this would require me to be admitted to hospital for two full days so that everything could be done while I was there. They assured me that the amount of time I would need to be there would be kept to a minimum as they were sensitive to me having a baby. I wasn’t given a timeframe for when this would be as they said that they had Covid-19 in the wards. For the pain in my hands, they suggested using medicated lidocaine plasters which could potentially numb the nerve pain in my hands.

Not knowing what to expect I tried the medicated plasters one evening. They came in a large rectangular shape and designed to be used as a patch on different parts of the body. For my hands Mr Kindness helped cut them into the right shape and stuck them on. I went to sleep with them hoping to awake with numb hands. The next day when I peeled the plasters off, my hands felt so tingly it just made me focus more of my attention on them – so that plan flopped!

Truth be told the appointment with Ankle Specialist II was a complete waste of time! They faffed about with the Zoom technology blaming it on my internet. After getting fed up with the constant stop-and-restart I suggested we did a Whatsapp call. I had Mr Kindness on hand again to help as cameraman and he showed my ankle to them. The only thing they suggested was to keep up with the physio and they would review again in a month’s time?! That was it after an hour of mainly Zoom fail. Mr Kindness was so angry on my behalf: how on earth did this person expect to find out what was wrong via a dodgy camera angle and no further testing?

Early May and the hand pain reached an unbearable level and the tips of my left thumb and forefinger felt like I had giant thorns inside. I contacted Knowledgeable-Neuro to ask where they were with my hospital admission and they said that they would be arranging patient admissions from the following week as things were getting back to some sort of ‘normality’. I felt like I was holding onto a last thread. One evening it became too much and I was howling in pain in front of Mr Kindness. Before I went to bed he sent a worried text to Knowledgeable-Neuro – full credit to them as they called straight away (it was 10pm!) asking about the situation. They reassured Mr Kindness that I would be admitted into hospital for further testing really soon. I contacted them again a few days later (it felt like I was harassing them but I had no choice!) and they informed me that they had put in the request for the admission.

I would be contacted in the next few days…

1 thought on “The PET scan”