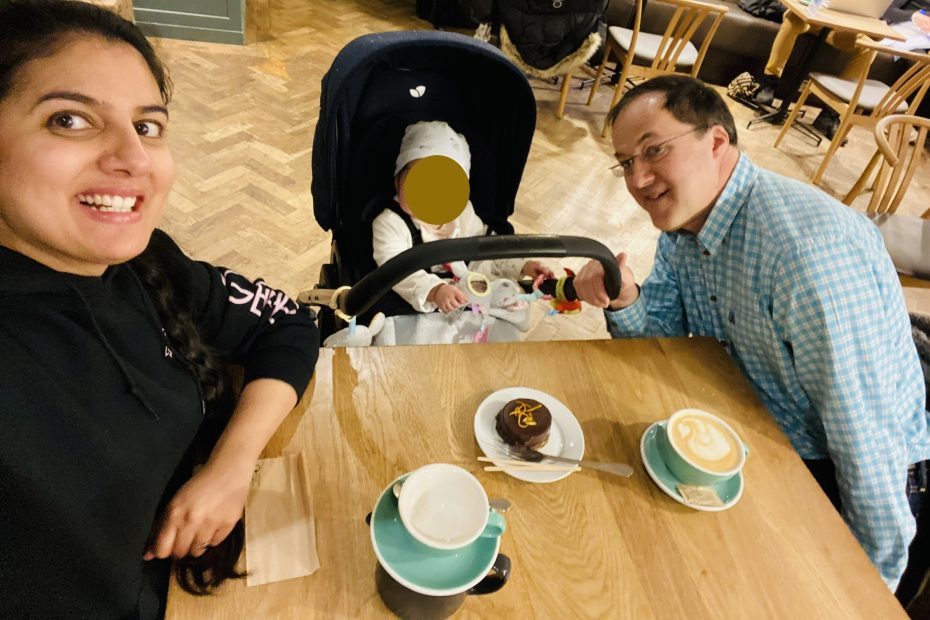 The first thing I did when I got home from the appointment was contact Aussie Neuro who had performed the EMG (electrical test) for me before. Surprisingly they replied late in the evening and had an appointment time for me the next day. After clearing this with Mr Kindness I snapped it up and we headed off the following evening to the same place as last time. When we arrived they messaged saying that they were running late which meant that we had to kill some time and so we three headed to a local bookshop which had its own coffee shop!

We had started to hear whispers of a mystical word ‘coronavirus’ in the news and how we should be aware of it but the world was operating as normal and we followed suit. It’s strange looking back now as I remember in the coffee shop Bubsell kept dropping things from her pram and at one point a little boy picked up her toy and gave it back to her. I thought, ‘could that be dangerous him touching it and giving it back?’ but brushed the thought away.

We headed to the hospital when Aussie Neuro messaged and once there we saw big signs had been put up about frequently washing hands and staying away if you were unwell. Mr Kindness and I had been nervous about being in a hospital having heard about this new virus but we ploughed on as we had a purpose: to get this test done. It was exactly the same process as last time. This time around, after the tests were done Aussie Neuro was a lot more personable and even had what seemed like a half hour chat with Mr Kindness trying to understand the background of some of the characters in The Archers on Radio 4 (don’t ask how we got into that conversation?!). They did however have some bad news: my condition had worsened since the last time I’d seen them and that this would be explained to me more when I saw Eccentric-Neuro. They thought a nerve biopsy might be the way forward to work out what was going on inside. That horrified me but they said it was a fairly routine procedure – and to illustrate that point told us that at medical school they performed it on each other!

Early March and we started hearing more and more about coronavirus in the news and saw footage of how it was sweeping across Europe. It was currently in Italy and there was talk of how they were two weeks ahead of the UK and how they had introduced ‘lockdown’ – a phrase that I hadn’t really heard before. On seeing the news my ‘mummy antenna’ went off and I said to Mr Kindness that we were going to be heading in the same direction and we really needed to make sure we stocked up for Bubsell – if we don’t have enough of her supplies we would be in trouble! The following day I hobbled out the front door to the shops with the mission of being prepared for whatever came our way with this coronavirus. I hobbled because my ankle was aching and giving me real trouble but I carried on, hoping that like my knee it would just go away by itself.

One by one I ticked off all the items I had classed as ‘essential’ for our survival if we were to be ‘locked down’ at home: pasta, kidney beans, paneer… chocolate (obviously!). But the most important items were obviously formula milk and nappies which I stocked up on and headed home satisfied with my purchases. Late afternoon on the same day I encouraged Mr Kindness to come out with Bubsell to do our home toiletries shopping and we headed to the nearby town to complete this. Strangely the shelves in one store had been wiped clean (!) of hand washes and loo rolls but luckily we managed to find them in another where a harassed-looking shop assistant wheeled over a trolley stacked with loo rolls and was pounced on as customers grabbed them like vultures. We sympathised and he told us it had happened to him umpteen times today and saved him the job of stacking the shelves! When we got home my ankle was the size of a grapefruit and paining so badly.

The next day I went to the GP. They examined my ankle and asked another GP to come in for a second opinion. They both put the fear of god into me saying that, as I did not have feeling in my ankle, there was a risk I could develop Charcot arthritis (like what?!) and so I needed to see a specialist. They also asked me to have an x-ray at the local hospital – again!

Another trip to the hospital, but this time round things seemed very different when I arrived and hobbled to the right place. I was asked if I’d been to Wuhan in China and I assured them that I had not been out the country in months and finally had the x-ray done. Weirdly to this day I have not heard about the results of this from the GP so I guess I should just write this trip off to experience. I did however manage to gain brownie points with my karma by offering my unexpired parking ticket to an old man at the pay station who was overwhelmingly grateful!

The GP was very efficient in sending through the referral to an ankle specialist as I received a call as I arrived home from the hospital, booking me in for an appointment in two days. Surprise surprise I was back at the hospital which seemed to be turning into my second home! On arrived I was asked if I had travelled abroad… yada yada – and then told that in my notes the specialist had asked for me to get an x-ray done before they saw me, what a waste of time the x-ray I’d done before had been! This was in another part of the hospital and then I was escorted into a room packed full of people (oh how little they knew then!) to wait to be called.

Once called I followed the specialist who seemed to be striding to get to their room whereas I was like a hobbit trying to keep up. They examined my x-ray that had appeared like magic and said I had an AFL sprain (say what?) and needed to wear an ankle brace. They recommended a type I could buy online, showing me some options on Amazon. They also said I needed to rest it completely for at least six weeks, if not longer as the recovery time may be longer as I was on steroids (errr, totally practical with a sprightly eight month old!). The most memorable part of the conversation was them asking me “do you have a crutch?”. I looked at them as if to say ‘I’m 35 – like really you think I have a crutch?’. To which they replied “I strongly recommend you use one as you need to try and take the weight off the ankle”. A physiotherapist then showed me how to use one and I took it home. You can imagine Mr Kindness’ reaction when I arrived home with it!

After the ankle saga I went for my second opinion appointment with the neurologist that had been recommended to me. I shall refer to them as Awkward-Neuro – again for obvious reasons!

I had had a conversation with my mum saying wouldn’t it be a miracle if they took one look at me and said “Ah-ha, I know what this is…” and cured me! She told me she prayed that this would be the case. What was bizarre was that a few days before the appointment my sister-in-law had visited and in conversation she said she had seen Awkward-Neuro who had found a diagnosis for her. She said they were really good but old fashioned in manner: during her appointment they didn’t address her about her condition but spoke to her husband – how odd!

With this in mind I attended the appointment armed with the results of the EMG. They did all the physical tests that Eccentric-Neuro had done and at the end said that they didn’t know of anything off the top of their head but considered the possibility of Vasculitis (I’d never heard of it at the time) and a nerve biopsy might be might the best bet. There was a lot of talk of where best to take the nerve biopsy from before I’d even got my head around the idea – my hand? my foot? – yikes. They said they would write to Eccentric-Neuro with their ‘thoughts’ and I came out of the appointment confused.